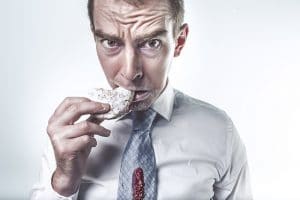 By Elizabeth May, RDN, CSOWM, LDN

Researchers at the University of Guelph found an interesting link between hunger and mood. Read more about the study published in Psychopharmacology here.

The Basic Gist
Rats were given glucose blockers to induce hypoglycemia (low blood sugar). When the rats were removed from this chamber and injected with some water, they avoided going back in the original chamber where they experienced the hypoglycemic reaction. When researchers checked the rats, they found elevated levels of corticosterone (stress indicator). The rats were apparently stressed from the hypoglycemic experience. Not surpisingly, the rats were also more sluggish after being given the glucose blockers. However, when the rats were given antidepressants, they weren’t sluggish.
The rats experienced both stress and depression when given the glucose blockers. Researchers pointed out that hypoglycemia could have a negative long term effect on depression or even on causing depression. Nutrition yet again plays such a huge role in health!
How To Manage Hypoglycemia

Helpful nutrition tips and articles delivered straight to your inbox.